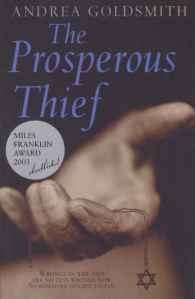 ‘A riveting tale that takes on every piety about the Holocaust and holds it up to heartbreaking and unflinching scrutiny. It may technically be about the Holocaust, but at its heart, this is about what happens when a cataclysmic event has been too often narrated and too often dramatized on television and in films. Can an individual feel the burden of history? Should history be reduced to memory? At the center of this story is Henry, an impoverished, disenfranchised German thief, for whom the war is a godsend, and the Lewin family, cultured, educated and Jewish, and unlike Henry, unable to believe that Germany would turn its back on its most accomplished citizens. The German thief steals the identity of the Jewish family, and after the war, he builds a full, happy life in Australia—his son is an observant Jew, his daughter a worker for human rights. When members of the Lewin family come to Australia to confront the thief and his children, everyone is made to consider what good knowledge actually does in the world—how does knowing the truth of anyone’s experience change one’s own? Any account of the plot cannot give a sense of the story’s beauty. Goldsmith’s feeling for the subtleties and contradictions of individual characters evoke the stylized, layered sentences of Henry James, even Tolstoy. This is all compulsively readable, almost hypnotic in its ability to draw the reader in. A superbly crafted novel that’s less interested in the historical events of the Holocaust than the ways in which the late-20th century inherited and struggled with its multiple legacies.’