My last visit to London was a couple of years ago, the January that Trump was inaugurated. I was visiting alone, and with work behind me in Melbourne and more work ahead of me in Berlin, my stay in London was to be a holiday. Rather than my usual rental in Bloomsbury, I borrowed the flat of a friend. It was located in Marylebone, south of Baker Street and a short distance from Wigmore Hall. My friend had briefed me about the area: the cheese shop, the wine shop, Daunt Books in the high Street, and the weekend market in a carpark at which, she said, she had once seen the writer, Julian Barnes, shopping for vegetables.

The day after I arrived, rather than explore the local area, I went to the RA. It was the last day of an abstract expressionist exhibition, the central exhibit, at least to my Australian eyes, being Jackson Pollock’s stunning Blue Poles. Afterwards, filled with that pleasant, lightly exhilarated feeling one gets with the best of art, I popped across the road to Hatchards.

It still felt like the old Hatchards, or rather, it did not feel like another Waterstones, and I browsed happily, and at my leisure. I ended up buying a memoir by a woman about her sister’s suicide – I thought my interest in death books might have dwindled, but even now, ten years after D’s death, it still hasn’t; I indulged in a little fun book calledI Wandered Lonely as a Cloud…and other poems you half-remember from school; and lastly, I bought a new Vintage edition of Julian Barnes’s Metroland, his first novel and one I’d not previously been aware of. (Would I have bought this book if not already oriented in Barnes’s direction by my friend’s mention of him? I think not, although when I purchased the book I don’t believe I made the connection.)

It was a beautiful edition, a ‘special archive edition’, with a repeated graphic of a small cluster of suburban homes front and back in orange and magenta, folded flaps for the blurb and author bio, and illustrated end pages decorated with another repeated graphic, this one in orange and grey and also of houses but with the addition of the Eiffel Tower, so you know these are Parisian houses and not the London suburbs of the front and back covers. 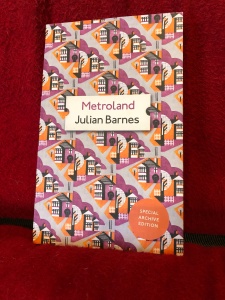 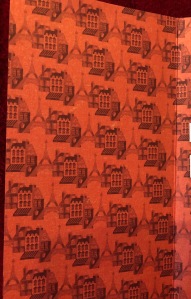 A lovely edition, although less lovely to read – nothing to do with the print or the layout, but rather the spine was reinforced with steel-like glue. There was no bending this spine, no possibility of hands-free reading, the book lying independently on a table while I sipped my coffee or ate my breakfast or made the occasional jotting or just stretched my arms or shifted my position without missing a reading beat. The spine needed the strength of a weight-lifter to keep the book open.

This not withstanding, I was hooked from the very first page, indeed, by the very first line: There is no rule against carrying binoculars in the National Gallery.It was the word ‘carrying’ that particularly pleased; it contained so much more narrative possibility than the more prosaic ‘using’.

The novel is structured in three sections, with Chris the first-person narrator throughout. The first and longest section enters the world of Chris and his best friend Toni in 1963. Chris and Toni are all-knowing, all-critical, 16-year-old intellectuals. They are steeped in French writers, they assume an air of superior alienation and ennui, they deride parents, school and, above all, life in Metroland, that area of London served by the Metropolitan tube line. They look forward to the day when they are free to escape and enter LIFE PROPER.

How familiar I found this attitude, although in my case it came equipped with far less confidence and less superiority than that revealed by Chris and Toni. How familiar, even though it happened a half a century ago in the late 1960s, on the other side of the world, and at a time of life I preferred to forget. (I never really got the hang of childhood or adolescence, would have done better to begin life at 30.) Back in those long-ago days, I was reading the same French books as were Chris and Toni, and I was writing angst-laden poetry about not being understood, and in the same way that Chris and Tony dreamed of escaping Metroland, I dreamed of escaping suburban, far-from-everything Melbourne. London was the location of my LIFE PROPER. Already steeped in the Bloomsbury writers and artists, I would live a short walk from the BM – I, too, rejected the Metropolitan line without even knowing it – and I would write books. (My first published story was titled ‘If Patrick White Married Virginia Woolf’ in which a misunderstood Australian girl imagines the perfect life: PW married to VW, living and working in London along with their children, an Australian-born girl and Hurtle Duffield from White’s The Vivisector. Clearly I’d made the not-particularly-large leap from angst-filled poetry to hope-filled, biographically-stifled fiction.)

But back to the present. I am living in an area of London that may or may not be associated with Barnes, reading his first novel, I’mburiedin his book, in the longings of his young characters that match my own long-ago longings (perhaps the same longings experienced by all bright children), longings that reappear to me exactly as they once were, untouched by time or experience. And then, unbidden, I find myself, in the whirl of my own early escape to London, that first impoverished visit of wonders, that at-last-I-can-start-life sense of boundlessness and fear. I haven’t moved. I’m still sitting in my friend’s flat in Marylebone, reading Metroland, Julian Barnes first novel, I am in the mire of my 16-year-old self’s longings, and I am alone in London as a 21-year-old. And all this is happening simultaneously.

It’s like being in a three-dimensional Blue Poles, or better still, a three-dimensional Rothko (his is such a deep imagination), or inside a Mahler symphony. Linear time and linear space have been demolished by limitless imagination. Times past, times present and times future all mixing and mingling at the same time.

It was a fevered, fantastic experience, and while not the first time it has happened to me, there was a particular intensity on this occasion. Good fiction, the fictions that seduce and hold until the last page, invariably illuminate your lived experience. As I read Barnes’s Metroland,and relived times past, and also idly wondered if I might see Barnes himself at the Farmers’ Market the following weekend, there were swervings and touches and connections occurring in the imagination, enriching that vital swirl just beneath consciousness. And some time in the future, while occupied with the mundane business of life, doing the washing, walking an aisle in the supermarket, I will be aware of sparks and curiosities that emerge from that rich swirl, that shape into possibilities that firm into ideas and understandings. Standing in front of the oils and vinegars, I will be astonished and delighted by this wonder that is the imagination: the fuel of the LIFE PROPER.

6 thoughts on “Times Past, Times Present.”