Recently I was in London. I am familiar with the city, indeed, next to Melbourne, London is the city I know best. I first visited as a 21-year-old and have returned perhaps a dozen times since, sometimes staying just week or two, other times for months.

On that first visit, in 1972, the King’s Road was still the King’s Road, indeed, the sixties, most of which I’d been too young to explore fully, were still very apparent in clothes, in music, in a loud fuck-you attitude to traditional institutions, in a ‘new left’ that still had a presence. Of course, within a couple of years, the prevailing belief of the 1960s that the personal was political would metamorphose into the personal growth and development movement. Indeed, by 1975, politics had almost entirely disappeared, and what Tom Wolfe termed the ‘Me Decade’ was in full swing. Instead of storming the barricades of the past and of privilege, ‘realising one’s potential’, ‘finding the real me’, ‘remodelling the self’ had become the raison d’être of a meaningful life. This trend was described as ‘the new alchemical dream’ and the ‘sweetest and vainest of pastimes’ by Tom Wolfe in his essay ‘The Me Decade’ – which still reads well, more than forty years on.

I lived in London for several months that first time. The plan had actually been to stay indefinitely, but a boyfriend in Melbourne and a lack of confidence in my own capacities brought me home within a year. But still I managed to cover a lot of ground. I walked the streets of London, I walked for hours, for days, and I walked alone. And I read. I read the existentialists finding a vocabulary for my own angst, I read books on the sociology of alienation, I read the soul-breakers of poetry, Baudelaire and Rimbaud (my brothers, my brothers) and I read Virago’s recently discovered feminists as well as George Eliot and Edith Wharton and many others.

It was a very solitary time. There was no one to disturb my reverie and no one on whom to test my thoughts. As I walked the London streets, my mind was alive: to the books I was reading, the people and scenes around me, as well as memories, longings and imaginings. It all mingled together, hard to separate the facts from fiction and both from desire. Not that I minded, I was never lonely in a George Eliot novel, I was never clumsy or misunderstood when a part of alienated youth, I was never shy or reticent in my imaginings.

On my latest trip, unlike the several that had preceded it, impressions from my first visit to London surfaced with particular vividness. In fact, there were times when I felt as if I were simultaneously living in different time zones, that now was also then, and, given my awareness and knowledge of this experience, much of the time in between. There were two factors that marked this trip as different: the first was a book – Julian Barnes’s first novel, Metroland – the second, an exhibition about the 1960s that was showing at the V&A.

Back in the old days before e-books and electronic readers, books would take up a good portion of my suitcase when I travelled. While I will always prefer reading a paper book to a screen, these days I travel with my iPad loaded up with both new and old titles (I never leave home, for example, without the complete works of Jane Austen), I travel with the equivalent of several suitcases of weightless books. But I was in London and staying around the corner from Daunts, and I simply could not resist.

going to London. In the meantime, visit the Daunt Books website and take the virtual tour through this lovely Edwardian bookshop (make sure to check out all three floors). I found an essay by Brodsky on Venice that I’d not known about before, and a fat family memoir by Mary-Kay Wilmers, the editor of the LRB; I picked up a new Justin Cartwright, Lionheart, and Julian Barnes’s first novel, one of the few books of his I’d not read.

From the first page of Metroland, indeed, the first sentence I was hooked. ‘There is no rule against carrying binoculars in the National Gallery’ the novel begins. How could I not continue? Is there a rule about using binoculars, I wondered. And plunged ahead.

Metroland comes in a lovely edition, a ‘special archive edition’ according to the publishers (Vintage). It’s a paperback with folding flaps and a repeating graphic of stylized suburban houses on front and back, and inside both covers there’s a similar repeating graphic in a hot orange. 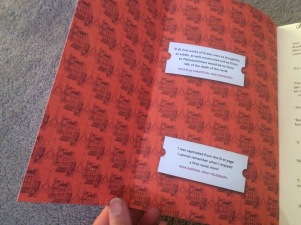 The book begins in 1963 in Metroland, that area of London served by the Metropolitan line, when the narrator, Christopher, and his best friend Toni are 16 years old. Christopher and Toni are intellectuals, they’ve read books their fellow students have never even heard of, they pepper their conversation with French and they fancy themselves as modern-day flâneurs. And they assume that distanced, critical, somewhat superior stance of alienated youth. They are adamantly not of Metroland and will escape as soon as they can. The book is laugh-aloud funny at times, it is also very knowing.

For almost half the book the narrative stays with the boys in Metroland before shifting, along with Christopher, to Paris in 1968 – yes, that pivotal year, although unfortunately the upheavals (or, as Christopher refers to them in meaningful italics, les événements) seem to have passed him by. In the third section of the book the narrative shifts back to Metroland. Now it is 1977 and Christopher is a husband and father; he is far wiser and far happier (with neither shame not embarrassment) than his younger self.

I was captivated by the entire book, but it was the first section, the youth section, that had the major impact. I recognised those boys, not in every respect and certainly not in their fixation on sex, but in their reading and other intellectual pursuits and their sense of being different from their peers. (I wonder if all intellectual children of the second half of the 1900s gravitated to the same books.) Because there were two of them, they managed to legitimate the other and they often made light and merry of their difference. In my own case, I too met a like-minded girl in early adolescence. It’s much harder if you are alone. So I was infusing Metroland with my own experience, or Metroland was infusing my memories and I read and read and did not want the book to finish.

During this time I visited the 1960s exhibition at the V&A. The clothes, the bands, the books, the films and TV, the posters and badges, the personalities, how very familiar they all were. Best of all was a large room where a movie of Woodstock was playing, huge images covering the walls and cushions cast across the floor, and there I sat rocking along to the familiar music, gazing at those lovely familiar figures.

This entire exhibition was a banquet in identifying with the familiar. As I wandered the exhibition, I saw that most of the other on-lookers were around my age, and I saw the smiles on their faces, the pleasure of recognition, as they peered at the exhibits. I wasn’t the only one enjoying this trip to the past.

But was it the past? I was in the now, I was in the present. What I was recalling did not make me forget where I was, the pull of the past did not obliterate the present. Indeed, it was the past coming into the present, like red wine into water, a lovely mingling that softened and pleasured the present. (This is quite opposed to nostalgia, a deluded state that has you longing for a lost past.) This past was enriching the present, and the present was making more sense of the past. Simultaneous and merging time zones, I decided.

Often when explaining memory, metaphors from archaeology are evoked. So, for example, we read of the strata of time, the bedrock of events. These particular metaphorical associations are romantic in a nineteenth century type of way, but they are not accurate. The memories that burst upon us do so in a single moment, they are not sequential; simultaneously they operate together with one another and with current events. There’s nothing linear or strata’d about it.

Our sense of time is that it flows inexorably forward while now, this moment, does not. Now, this moment, if you could only hold on to it, is stationary. Now is what we experience. But for it to become experience, something reflected on, something that can be drawn upon in the future, it is no longer now, but rather it becomes part of our stock of knowledge (surely, an aspect of memory), a sort of personal and portable library.

I was learning more about the past, more about now with the sixties of Metroland, the V&A exhibition, and I actually made my way down to King’s Road, the first time in years. The days passed as if inside a movie. Movies, like novels, toy with time, years can pass in a few pages, or from one scene to the next. We might see in a flick of hair or perhaps a facial grimace alerting us that a character has remembered something, in a novel we can actually know the character’s thoughts. We are of this time and we are of all our time. Each memory affects many that have gone before and will itself be affected by many that come afterwards. And all those memories are still active as we make our way through the often tumultuous currents of today.