ABR has grown in recent years and is well worth a look – both the print version and the on-line version. I’ve just joined the board of ABR, and as a trenchant non-board, non-meeting sort of person, this act says volumes about the publication. 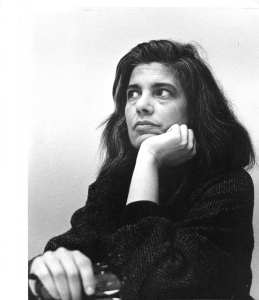 The intellectual lover moved on as youthful lovers do, but Sontag remained: a reliable and enduring guide through my formative years. And while she was not my only guide, she was the most compelling, the most provocative and, indubitably, the most beautiful.

Her essays revealed who I should be reading, whose films I should be seeing, whose art I should be viewing. Sontag alerted me to the style of camp, the power of metaphor, to the complex meanings of photography and pornography. There was a moral imperative operating here – to not know was to be intellectually negligent – and an urgency too: her enthusiasms, the ideas that captivated her and the people she admired, were essential to an intellectual in the making. Sontag introduced me to Walter Benjamin, Borges, Simone Weil, Artaud, Barthes, Elias Canetti and many other luminaries. She shaped my understanding of the films of Godard and Bergman. It was Sontag who had me lining up for hours outside a San Francisco theatre, under assault from neo-Nazis, in order to see a one-off screening of Syberberg’s seven-hour marathon, Our Hitler. A Film from Germany.

The first three essay collections, Against Interpretation (1966), Styles of Radical Will (1969) and Under the Sign of Saturn (1980), contain many pieces that still pack a punch today. In contrast, the two early novels, The Benefactor (1963) and Death Kit (1967) were always a struggle. At my first attempts, and with the blindness of the acolyte, I believed my failure to appreciate them was indeed my failure, and not the fault of the work; back in those days, Susan, my Susan, was infallible. That the novels were bad – which they are – simply was not an option.

Sontag’s intellect was voracious, her passion for life was insatiable. She wrote essays, monographs, fiction, she directed plays and films, she was a political activist, she was president of PEN, she travelled extensively, she had many friends and lovers.

From the beginning she was the sort of writer to go against mainstream ideas. In the 1960s, when most intellectuals were narrowly focussed on high culture, she argued the case for popular culture. By the 1990s, when pop culture was thriving and high culture was languishing at the university gates, she took up the banner for high culture. In an interview with Allan Gregg conducted in the late 1990s she said that the role of the writer is to be ‘somewhat adversarial’.

Sontag was forceful, she was eloquent and, yes, she was adversarial. Such characteristics inspire strong responses – accolades as well as criticism. But the qualities which produce exciting, contentious, courageous work are unlikely to emerge from a sweet, gentle, empathic nature. As Yeats suggested: it’s ‘perfection of the life, or of the work’. Some of the responses to Sontag have garnered considerable notoriety, such as Camille Paglia’s diatribe, ‘Sontag Bloody Sontag’ (Vamps and Tramps, 1994), and Terry Castles’ wry, disarmingly honest yet appreciative essay, ‘Desperately Seeking Susan’ (LRB 17/3/2005). A particularly informative and well-received essay about Sontag’s life and work is Joan Acocella’s ‘The Hunger Artist’ published in The New Yorker of 6/3/2000, while a staggeringly mean-spirited essay has come from Elliot Weinberger in his review of At the Same Time, Sontag’s posthumous collection (NYRB, 16/8/2007).

Daniel Schreiber’s biography, originally published in German in 2007, is, to my knowledge, the first book-length study to have appeared after Sontag’s death in December 2004. During the writing of his book, Schreiber was aware that David Rieff, Sontag’s son, planned to publish his mother’s journals. The first volume of these, Reborn, was not to appear until 2009 and Rieff refused Schreiber’s request to view the diaries prior to publication. Rieff’s own deeply personal and anguished memoir of his mother’s last illness and death, Swimming in a Sea of Death, was not published until 2008, and Rieff himself granted only one interview to Schreiber. Annie Leibovitz, Sontag’s partner for the last fifteen years of her life, refused Schreiber an interview. To write a biography without input from major players and source material is a risky exercise. In Schreiber’s case, he has failed to pull it off. His is an irritating, amateurish, tepid biography that provides a pedestrian overview of Sontag’s work and fails to illuminate the woman herself.

A good deal of Schreiber’s material is drawn from interviews with Sontag ‘friends’ – Stephen Koch, Richard Howard, Steve Wasserman, Wendy Lesser among others. The nature of these friendships, their duration and dynamic, is given little or no explanation in the text. This, combined with the absence of an acknowledgements section, leaves the reader unable to judge both the worth and integrity of this source material. Sontag valued friendship; at the same time, she was quick to judge and would sever relations with friends if they disappointed her. Enduring friendship was not one of her strong suits, so when ‘friends’ provide so much information we need to know something about them. (An entertaining account of friendship Sontag-style is given by Terry Castles in ‘Desperately Seeking Susan’ – an essay which, incidentally, includes no mention of any sexual connection between these two alpha females. Yet Schreiber refers to Castles as ‘Sontag’s later lover’ (p.93), referencing an interview he conducted with Castles. Terry Castles has never been coy in print. If she and Sontag had dallied, not to have included this titbit in her essay but conveyed it to Schreiber for his book strikes me as very out-of-character.)

The published sources Schreiber uses are commonly known to Sontag followers, the book lacks a proper index, it contains no images. I did not learn anything new, and was constantly frustrated by what had been left out.

Jerome Boyd Maunsell’s short biography covers both the life and the work and integrates the two effectively. Maunsell draws judiciously on the journals as well as Sontag’s body of work. He also makes relevant use of Rieff’s memoir, as well as Sempre Susan (2011), a memoir written by Sigrid Nunez, an early girlfriend of Reiff’s, who lived with him and Sontag in the 1970s. Maunsell’s book is highly readable, and, to date, is the best of the biographical writings.

Susan Sontag was a brilliant and original essayist who wanted her reputation to rest on her fiction. She wrote four novels and published a volume of short stories. Of the novels, three of them, including her last, In America (2000), make for poor reading; only the third, The Volcano Lover, an historical romance shaped around the collector and diplomat, William Hamilton, his beautiful young second wife Emma, and Lord Nelson of the Admiralty, displays the fine focus, the sense of continuity and cohesion, and an intense interest in character that marks good fiction. There’s a tragic dimension to the brilliant essayist who wanted to be recognised as a brilliant novelist.

Susan Sontag did not suffer fools gladly, indeed, she did not suffer them at all. She was impatient with slowness, stupidity and those who held opinions which differed from her own. Deification often occurs when an esteemed person dies, when the person enters what Janet Malcolm calls ‘the ranks of the illustrious, unmortifiable dead’. This has not happened in the case of Sontag, perhaps because deification occurred during her life. But now that she can no longer speak for herself (except in the painfully personal diaries – which make her an even easier target to would-be detractors), people are not holding back.

Only the mediocre person is always at their best, as Somerset Maugham self-consciously said. I have recently re-read Sontag’s essays and monographs. I didn’t agree with everything she wrote nor was I bowled over by all her choices of topic, but I was stimulated and invigorated by the originality of her ideas, by the exactitude of her expression, by the breadth of her knowledge. And grateful too: her work remains a rare pleasure.