There’s a residue left when a novel is finished. You rarely recognise it at the time; only later, when the next novel is nearing completion do you see a connection with the one that preceded it.

While writing The Memory Trap I was vitally interested in monuments, in particular, how voluble they were about political and social currents. Following the break up of the Soviet Union, there was an avalanche of falling statues and monuments throughout central and Eastern Europe – as if the communist years could be so easily shattered. And, more recently, there’s been a rise of new monuments exemplifying a revised perspective and understanding of the Soviet years, including a number of monuments erected to the victims of communism. 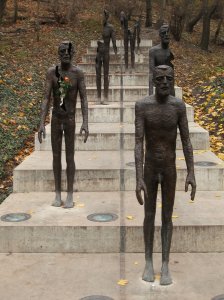 The Prague Monument to the Victims of Communisms (Photo by Serje Jones.)

The Memory Trap was finished and in production when I found myself reaching for books focussed on Putin and contemporary Russia. Apart from the usual Russian novels (Dostoyevsky, Tolstoy, Gogol, Pasternak, etc) and the poets (Pushkin, Mandelstam, Akhmatova, Tsvetaeva) I’d read nothing about Russia. I did not bother to analyse this new direction in my reading: a novel was finished, I needed to fill up again, I know it to be a hapahazard business. I quickly realised that to understand Russia today required a knowledge of the Soviet years; and to understand the revolution and the years that followed required knowledge of Russia under the Czars. So back I went. My reading petered out around 1880.

I read the stunningly informative and always engaging Orlando Figes. (They are all good but The Whisperers: Private Life in Stalin’s Russia is unique, compelling and unforgettable.) I reread Nabokov novels and autobiographical works, and I read biographies of both him and his wife, Vera. I read Nadezhda Mandelstam’s autobiographies Hope against Hope and Hope Abandoned, both extraordinary documents of Stalin’s terror and beyond. I read Russian fiction and Russian poetry, I read one book after another. After a while I realised all this Russian reading must be taking me somewhere. Familiar with the need to fill up again when a novel is finished, and well-acquainted with the uncertainty that accompanies the writing of a novel, I was not too concerned to understand where these Russian books might be taking me.

At the same time as I was immersed in Russia of the past 140 years, the media was full of the Australian Government’s policy towards asylum seekers. Turn back the boats. No one who arrives illegally by boat will ever be permitted to settle in Australia. Politicians actually boasted of the success of the policy. Either they did not stop to think how cruel and brutal it was, or they did think about it and simply didn’t care. Desperate displaced people were seeking asylum, seeking safety with us, and we were treating them like criminals. As for the queues politicians and their supporters kept referring to, when your very life is being threatened, queues don’t matter. Queues won’t save you. Queues won’t protect you against rape, against mutilation, against rampaging soldiers intent on killing you and your family.

It seemed self-evident to me that no one would willingly choose exile. No one would willingly separate from one’s culture, land, language, friends and family, unless one’s very life was threatened. Why were we demonising these people? The politicians were whipping up hatred, and much of the press was following suit. Where, I wondered was our compassion, where our understanding? And why this fear of difference? Aboriginal Australians are the only indigenous Australians, the rest of us are immigrants. We were welcomed and yet now we refuse to welcome those seeking our help.

I was reading about Russia and the Soviet Union and I was thinking about exile and I knew that from 1979 to the break-up of the USSR, many Soviet Jews were allowed to emigrate – to Israel, to the US, to Canada and to Australia. And so the character of Galina Kogan started to form. Born in Leningrad in 1961, Galina travels to Australia alone in the mid-1980s.

It occurred to me there might be advantages to setting a novel in the recent past. A little bit of distance not only eliminates any of the bias directed at current political and social circumstances, it also provides a clearer view of these circumstances. Reading about the recent past almost automatically prompts a comparison with today.

It was in thinking about the 1980s that I created my married couple, Sylvie and Leonard Morrow, both born in the 1930s and married in the 1950s. Two people who experience exile – nothing to do with moving country, but exile from their own true selves. And their son, Andrew, an intensely shy young man, in exile from the social community that others inhabit with such ease. And so I started to write a novel that in a very deliberate sense, democratised the experience of exile.

The novel grew, the drafts mounted up. It was very late in the process when I realised the novel was also exploring the notion of self-invention. I came of age at a time when Erving Goffman and R.D. Laing were required reading. Goffman’s Presentation of Self in Everyday Life and Laing’s Self and Others are still on my bookshelves, while the ‘Looking glass self’ theory of the sociologist Cooley, is etched into my memory. All the characters in Invented Lives shape their personas according to the particular environment in which they find themselves. This is what we used to do prior to the digital age and social media. And back in those days you would receive immediate feedback from others in the environment through facial expressions, gestures and/or utterances, and make adjustments accordingly.

I knew very little of this at the beginning of writing Invented Lives. But that’s the magic of fiction. And now that Invented Lives is finished, I am filling up again with books about death. I wonder where that will take me.

4 thoughts on “Starting All over Again (2). The Genesis of Invented Lives.”